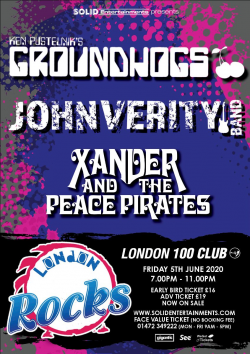 London’s iconic 100 Club has been trading under the same name since 1964 and Live music began there on 24th October 1942. Because of the club’s rich history, it has become an institution for intimate secret shows by major acts including Queens Of The Stone Age, Metallica, Alice Cooper, The Rolling Stones, Blur, The New York Dolls, Desmond Dekker, Primal Scream, St Etienne, Mark Ronson, Chuck Berry, Paul Mccartney, Paul Weller, to name just a few. Renowned artists from all over the world continue to perform here and as this is our first Rock Show in the capital, we have marked the occasion with three super charged bands; Ken Pustelnik's Groundhogs – John Verity Band – Xander And The Peace Pirates... Way back in the halcyon days of rock, there came a trio of 'superheroes' known as the Groundhogs. Now Ken Pustelnik brings you a new and exciting line-up of the Groundhogs, playing that classic material with verve and power, and giving performances of energy and excitement that are as fresh and relevant to the modern audience as the originals were back in the day... John Verity is now experiencing a musical renaissance through recent live appearances and album releases and will also be celebrating The 50th Anniversary in 2020 of the very first appearances of The John Verity Band in Florida back in 1970. Opening for Jimi Hendrix, Janis Joplin amongst others in the USA and then with Argent, he also spent time in the studio recording and guesting with Saxon, The Zombies, Colin Blunstone and Ringo Starr and many more.. Brothers Keith and Stu Xander were discovered on YouTube by Gibson Brands CEO Henry Juszkiewicz, With haunting riffs, genius melodies and a uniquely infectious charisma, Xander and the Peace Pirates continue to share their musical passion to standing ovations, while spreading a universal message of peace, love and harmony.